A previously healthy 7-year-old boy presented after 3 weeks of recurrent fevers, left lower-extremity pain, and mild diarrhea. In the emergency department (ED), he reported decreased appetite and energy levels but denied weight loss. There was no history of rashes, nausea, vomiting, or night sweats.

History and physical examination. All symptoms had been present concurrently over 3- to 4-day intervals and would subside for a few days before beginning again. Fevers usually occurred in the afternoon, along with diarrhea 1 to 2 times a day. The diarrhea was watery, with no blood or mucus, and was associated with abdominal pain and discomfort. Left lower-extremity pain was localized to the heel and ankle, with point tenderness at the medial calcaneus. There was no known trauma. The patient had difficulty bearing weight but had no erythema or swelling at any time. During the 3-week course of his illness, but prior to presentation, the patient had a sore throat. Results of a rapid strep test (RST) were negative, but he nonetheless was treated with a 10-day course of amoxicillin, because his sibling recently had positive RST results. The patient’s sore throat had resolved, but the other symptoms had not.

The patient was started on intravenous (IV) clindamycin due to concern for bacterial calcaneal osteomyelitis. The results of magnetic resonance imaging (MRI) demonstrated a focus of inflammation in the left calcaneus but were not definitive for osteomyelitis. After 72 hours of antibiotic therapy, the patient had minimal to no improvement, and the infectious disease service was consulted. Per their recommendation, the patient was switched to IV ceftaroline to broaden coverage.

Although the boy’s heel pain began to slowly improve, his fevers persisted. After 36 hours of ceftaroline, his CRP level remained elevated at 12 mg/L. At this time, the patient abruptly had 10 episodes of diarrhea within 24 hours, with fecal incontinence, spasmodic cramping, and intermittent tenderness in the right lower quadrant. Clostridium difficile test results were negative. The gastroenterology service was then consulted due to increasing concern that this patient’s illness was not infectious.

The gastroenterology service obtained a computed tomography (CT) scan of the chest, abdomen, and pelvis, the results of which demonstrated mural enhancement of the right colon and distal small bowel. A repeated CMP demonstrated a new hypoproteinemia of 5.9 g/dL, an albumin level of 2.8 g/dL, and a CRP level of 14.9 mg/L. 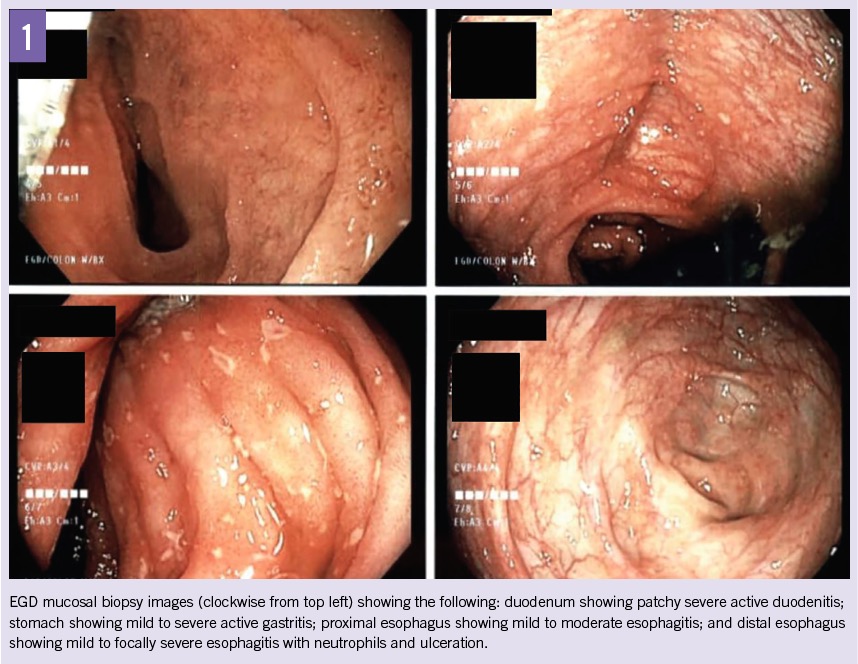 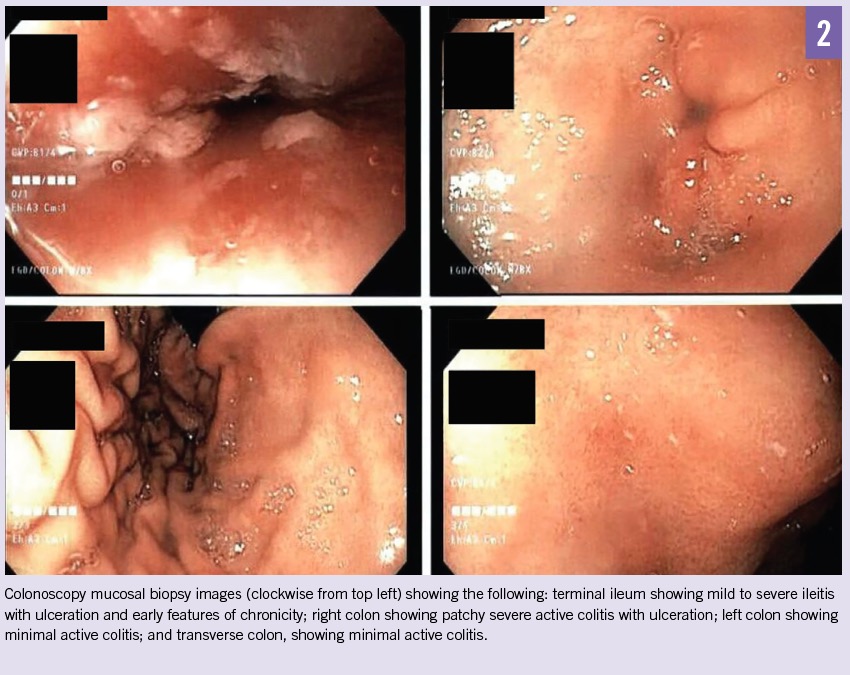 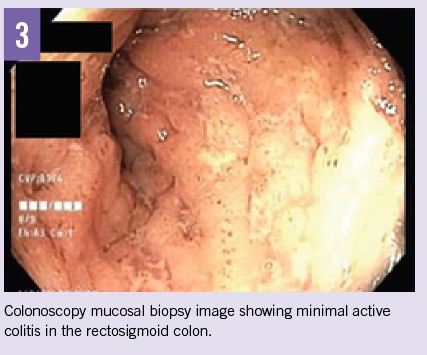 Antibiotics were then discontinued, and the patient received a diagnosis of Crohn disease (CD).

Treatment. The patient was treated with 20 mg of IV methylprednisolone and was transitioned to an oral prednisolone taper. He received a transfusion of iron sucrose for his microcytic anemia, which was thought to be anemia of chronic disease.

Outcome of the case. At the end of his hospital course, the patient was able to ambulate without assistance, and his presenting symptoms had diminished. Prior to discharge, he was placed on azathioprine, 50 mg once daily, along with ranitidine, iron, and vitamin D. At his first gastroenterology follow-up, his prednisolone dose was increased and his taper duration prolonged due to continued joint pain that had localized to his knees and that worsened with activity. His symptoms improved, and he was weaned from oral corticosteroids.

Differential diagnosis. Initially, our team thought that the patient most likely had osteomyelitis, given his various constitutional symptoms, point tenderness, and limitation of function. On the other hand, his mild diarrhea, the periods with no difficulty bearing weight, and the lack of erythema and edema were not as easily explained by an osteomyelitis diagnosis. Nevertheless, the patient was immediately started on antibiotics due to the serious consequences of untreated osteomyelitis, which include bony destruction.1

Other conditions on the differential diagnosis list included juvenile idiopathic arthritis (JIA), infectious diarrhea, an oncologic process, enthesitis-related arthritis (ERA), and inflammatory bowel disease (IBD) with arthralgias. JIA typically involves inflammation of the synovial tissue and presents with tenderness, warmth, erythema, decreased joint mobility, and intermittent fevers. However, patients with JIA typically also have morning stiffness and a rash, and JIA is not associated with diarrhea.2 JIA was therefore considered to be a less likely diagnosis. Infectious diarrhea was entertained as a possibility, but the sinusoidal frequency of the patient’s diarrhea would be quite atypical in this diagnosis and would fail to explain the leg pain. Ultimately, his negative GIP PCR results made infectious diarrhea very unlikely. An oncologic process was considered due to his constitutional symptoms and bone pain but was much less likely given his normal LDH and uric acid levels. ERA, which is a unique type of arthritis more common in males and associated with HLA-B27, was also considered. ERA presents with inflammation of the tendon and tendon insertion, which would have explained the patient’s leg pain. This diagnosis was considered less likely given that the patient had no risk factors such as a personal history of or first-degree relatives with ankylosing spondylitis, IBD, or reactive arthritis.2

IBD was on the initial differential, since it was 1 of the few conditions that could have explained the presence of diarrhea and joint pain. Many types of joint pain are associated with IBD, including nonspecific arthralgias, enteropathic arthritis, and ankylosing spondylitis. However, these IBD-related diagnoses were initially considered less likely given his negative FOBT results, higher-grade fevers, mild diarrheal symptoms, and lack of family history.2 IBD began to rise steadily on the differential as the patient failed to respond to antibiotics and his frequency of diarrhea sharply increased.

Discussion. This patient’s IBD diagnosis was made in a rather short timeframe. The incidence and prevalence of IBD in developing and developed nations are on the rise; the current mean prevalence in the general population is estimated to be 1 in 1000 in Europe and North America,3 with earlier presentations becoming increasingly common.4 Estimates show that approximately 10% to 25% of these cases are diagnosed in childhood or adolescence.3 Signs and symptoms can present in a subtle manner, so it is therefore important for clinicians to maintain a high level of clinical suspicion.

Guidelines for the diagnosis of IBD in children and adolescents include a detailed history, physical examination, laboratory testing, ileocolonoscopy, and EGD with stepwise biopsy.4 It is important to note that sigmoidoscopy is insufficient as a diagnostic tool for IBD. If colonic strictures are present, imaging with a barium enema or technetium-labeled leukocyte scan can assist in determining the extent of disease.5 Magnetic resonance enterography (MRE) is the imaging modality of choice due to its diagnostic accuracy and lack of radiation,6 although CT scans are often still used. IBD also may be divided into 2 subtypes: ulcerative colitis (UC) and CD. The subtype depends on various subtleties in symptomatology and histology. CD was diagnosed in our patient using endoscopic techniques with a biopsy. His constitutional symptoms of fever, decreased appetite, and decreased energy also fit the history expected of a patient with IBD. He did not require alternative approaches and underwent CT instead of MRE.

The most common initial symptoms of IBD are nonspecific and include chronic abdominal pain, failure to gain weight, and diarrhea.4 Other systemic signs that may be present include fatigue and fever. A diagnostician should strongly consider obtaining IBD testing with increasing systemic symptoms, or if other signs such as hematochezia, joint complaints, anal fissures, skin tags, or positive family history for IBD are present.4 If infantile IBD (younger than 2 years) is diagnosed, a workup for an immune deficiency should also be considered.6 Early diagnosis of IBD is critical, because it has implications for growth,4 education, psychological development, and long-term quality of life.3 One study found that the time from symptom onset to IBD diagnosis in children and adolescents was 4 to 6 months on average but occurred sooner in UC than in CD. A proposed reason for shorter diagnostic delay in UC is the occurrence of bloody stools, which studies have shown are more prevalent in children with UC.4

Extraintestinal manifestations (EIMs). Although primarily a disease of the intestines, complications and associated symptoms of IBD can occur outside of the intestines. Studies have shown that approximately 29% of pediatric IBD patients will develop at least 1 EIM within 15 years of diagnosis.7 EIMs can occur in a variety of organ systems, including the liver, pancreas, gall bladder, urinary bladder, bones, joints, lungs, eyes, and skin.8 Certain EIMs are more specific to CD than to UC, and vice versa. For instance, erythema nodosum and aphthous stomatitis are more likely to be seen in CD, while primary sclerosing cholangitis is more likely to be seen in UC.9 Moreover, certain EIMs tend to parallel gut inflammation in their severity, particularly type 1 peripheral arthritis, aphthous ulcers, erythema nodosum, and episcleritis.10

Of particular relevance to our patient’s case, studies have shown that approximately 6% of patients with IBD have an EIM prior to diagnosis. The most common EIMs at this time have been found to be joint pain and aphthous stomatitis.7 Sometimes the EIM may even be the most prominent symptom. For example, our patient’s primary presenting symptom was lower-extremity pain near the ankle, and his initially mild yet recurrent diarrhea did not appear to be the most pressing problem. IBD should remain in the differential diagnosis in cases of joint pain, aphthous stomatitis, and other EIM symptoms, even if gastrointestinal tract symptoms are minimal or absent.

Musculoskeletal pain has been reported in up to 53% of IBD patients of all ages.8 The seronegative spondyloarthropathies, a group of joint diseases that are generally rheumatoid factor–negative and HLA-B27–positive, have a strong association with IBD, and include ankylosing spondylitis, psoriatic arthritis, reactive arthritis, and enteropathic arthritis. Enthesitis may occur in up to 50% of the spondyloarthropathies,11 and its presence indicates ERA.

Symptomatology of these diseases can be classified as axial or peripheral.8 Axial arthropathies occur in the head, trunk, and spine; axial symptoms frequently precede IBD diagnosis and are completely independent of inflammatory activity in the gut.12 Ankylosing spondylitis produces very significant axial symptoms, most notably sacroiliitis, and is often associated with uveitis and restrictive airway disease.8

Peripheral symptoms occur in the knees, hands, and feet and may be further divided into type 1 and type 2 peripheral arthropathy. Type 1 is most common; it is asymmetric, is nondeforming, occurs in the knees and ankles, and mirrors gut activity. Type 2 is symmetric, is more chronic in nature, affects greater than 5 joints, and ultimately may cause deformity.8 Peripheral symptoms are most frequently a result of enteropathic arthropathy and follow a type 1 pattern but may also occur secondary to the other spondyloarthropathies.

In conclusion, we determined that our patient’s presenting symptom of lower-extremity pain was most likely due to enteropathic arthritis in a type 1 peripheral pattern, given that his arthritis was asymmetric, was nondeforming, occurred in the ankle and knees, and mirrored gut activity. It is possible that the patient also has associated enthesitis, which involves the Achilles and plantar fascia insertions on the calcaneus—precisely where our patient’s pain was the worst.13 Furthermore, enthesitis is known to cause focal inflammation and marrow edema with enhancement on T1-weighted imaging,10 which adequately explains his nonspecific MRI findings.

Which subtype of choledochal cyst is described as diverticula of the extrahepatic bile duct only?
Type I
Type II
Type V
Submit Answer